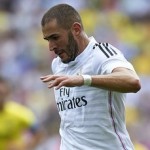 Reports are out claiming that Liverpool are making a fresh move for Real Madrid striker Karim Benzema.

The Daily Star says according to new reports, Reds boss Brendan Rodgers will make another move for the French international in the January transfer window.

Spanish news website Fichajes claim that Benzema is currently unhappy at the Bernabeu, and that the Frenchman is currently assessing his future at the club despite signing a new contract in August.

Those reports have prompted the Reds to prepare a winter bid for the striker, who has scored 113 goals in 243 appearances for Los Blancos.