Reports are out claiming that Borussia Dortmund chief Michael Zorc insists they’re not planning to lose Pierre-Emerick Aubameyang in January. 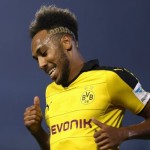 Arsenal and Barcelona have been linked with winter market bids for Aubameyang.

And Liverpool are also in the mix after the appointment of former BVB coach Jurgen Klopp as new manager.

But Zorc responded to the talk last night, saying: “We plan clearly with Auba.”

For his part, Aubameyang says: “I am with all my heart here, never wanted away.”