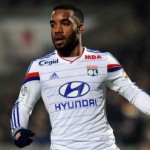 Reports are out claiming that Liverpool are reviving their pursuit of Lyon striker Alexandre Lacazette.

Brendan Rodgers yesterday admitted that goals have been a problem for his side this season.

And the Reds will now turn to Lacazette – the top scorer in Ligue 1 this season – in a bid to address the issue, says the Daily Express.

Chelsea, Arsenal, Tottenham and Manchester City are all keeping tabs on Lacazette, while Newcastle have reportedly failed in a bid for the striker in the past. Chelsea to swap Torres for Cavani