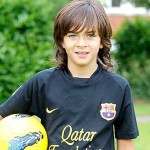 Reports are out claiming that Liverpool are raiding Barcelona’s La Masia academy for an AUSSIE whizkid.

The Daily Star reported that Zak Gilsenan, who is just 11, has been schooled at the same La Masia academy as Messi, Xavi and Andres Iniesta.

He was born in Ireland, grew up in Australia and has spent the last two years at Barcelona honing his incredible talent.

Arsenal, Manchester United, Manchester City, Tottenham and Chelsea were among a load of top clubs who wanted the youngster when it emerged he’d become available following the family’s decision to move to England.

However the Gilsenan clan decided Liverpool was where Zak should end up and he is poised to join their academy. I Didn’t Want To Play In Midfield! – Wayne Rooney