Reports are out claiming that Liverpool have joined the battle for wantaway Barcelona midfielder Cesc Fabregas. 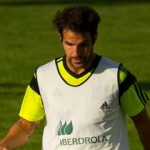 The Mail on Sunday reported that Liverpool are leading the chase to sign £30million-rated Cesc who is determined to return to England after Barcelona made it clear they are willing to sell him.

The relatively low fee for the 27-year-old midfielder, who was confirmed as part of Spain’s World Cup squad on Saturday, will tempt several Premier League clubs.

Former club Arsenal are also interested, along with Manchester City and Chelsea.