It has been reported that Liverpool are eyeing Newcastle United midfielder Cheick Tiote for the January market. 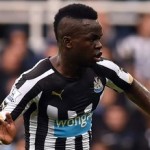 The Daily Star reported that Arsenal and Manchester United are two of the teams reportedly interested in signing the 28-year-old, who joined Newcastle in 2010.

According to reports, Gunners boss Arsene Wenger is eager to add some bite to heart of his team’s midfield – and has made signing Tiote his number one priority.

But the Arsenal manager will face competition for Tiote’s services from Liverpool.

The Reds are reportedly interested in signing the Toon star, and are preparing a £15.5m winter bid for the Ivorian.