Reports have emerged claiming that Liverpool are believed to be on red alert following recent comments by Marco Verratti. 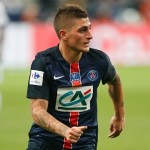 The Anfield club have been heavily linked with a summer move for the 22-year-old midfielder who admits he could be lured away from Paris Saint-Germain if the right scenario emerged.

“You never know what the future brings,” he told Goal.com.

“I am fine where I am now and I am not thinking about a transfer.

“I will consider my options the day I no longer feel good at PSG or when the club wants to sell me but England, Spain and Italy are all options.

“What matters most is the project.”