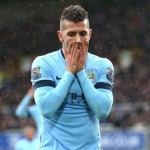 Reports are out claiming that Liverpool are eyeing Manchester City striker Stevan Jovetic.

Jovetic is ready to leave City after being left out of their Champions League squad.

Inter Milan and Juventus want to take the former Fiorentina frontman back to Italy, says the Sunday Mirror.

However, they will now face competition from Liverpool.

The Reds have tried to sign Jovetic twice before, but the Montenegro international joined City for £22million in the summer of 2013.

My Future Is With Juventus – Paul Pogba