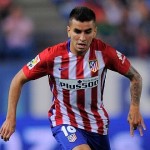 It’s emerged City made an approach to Correa while he was away with Argentina during the last international break.

Correa, however, refused to entertain the enquiry and told intermediaries to speak with Atletico if they were serious.

Don Balon claims that Liverpool are also interested in Correa as they weigh up whether to persist with the injury-plagued Daniel Sturridge.

Reds boss Jurgen Klopp is keen on a new striker signing in January and has also been linked with his former Borussia Dortmund forward Pierre-Emerick Aubameyang.

For Correa, he has assured Atletico’s he’s happy where he is and is grateful to the club for supporting him after a heart problem was discovered when he had signed with the Madrid giants.