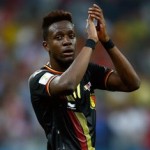 Interesting transfer news are out claiming that Liverpool have made a bid for Lille striker Divock Origi.

The Sunday Mirror reported that Liverpool have made a £9.8million bid for World Cup sensation Origi, and are now agreeing personal terms with the Belgian’s representatives.

The 19-year-old who is also wanted by Premier League side Arsenal, has made a splash on the biggest stage with Belgium in Brazil, and the Reds consider the Lille forward one of the most talented young players in Europe.

The Anfield transfer committee has sanctioned a structured £9.8million deal for the striker, with a loan-back agreement ensuring he remains at Lille next season where he can still play Champions League football.