Reports are out claiming that Liverpool are interested in Porto fullback Danilo. 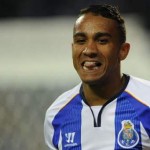 The young Brazilian is emerging as the hottest defensive transfer target this summer, with Real Madrid and Barcelona chasing his signature.

A Bola reported that Liverpool are also keen, as they prepare for Glen Johnson to leave when his contract ends in June.

“He is much like Maicon, at his best stage with Inter Milan when Madrid were interested in him. So he is qualified to play in Madrid.

“He is at the top of his game and so he could make it in Madrid.

“He is playing and is responding well, there is no better player of his type in Europe.”