It has been reported that Liverpool boss Brendan Rodgers remains keen on Barcelona winger Cristian Tello. 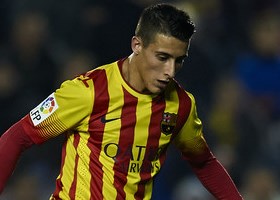 The Spanish international penned new terms earlier this season, amid interest from the Reds and other clubs across Europe.

The 22 year old’s playing frustrations, despite his new contract, remain and Calciomercato.it says a move away this summer is now being seriously considered.

Napoli, Inter Milan and AS Roma are all keen, as is Liverpool, where Rodgers is eager to add a new, goalscoring winger to his squad this summer.