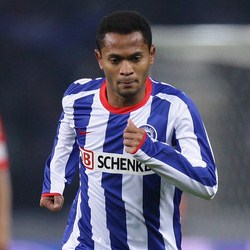 It has been revealed that Liverpool are watching Hertha Berlin midfielder Raffael.

Kicker revealed that the Premier League giants are among clubs watching the Brazilian this season.

The South American’s contract has two more years to run and he has a market value of around £7m and that has not deterred Kenny Dalglish’s side or Lazio and Sampdoria from expressing an interest. AS Roma To Challenge Liverpool For Dejan Lovren