Reports are out claiming that Liverpool great John Aldridge has advised manager Brendan Rodgers to start midfielder Lucas Leiva against Arsenal on Monday. 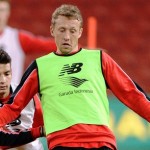 The Reds will travel to Emirates Stadium for a Monday night clash and Aldridge believes they would need to be wary of the Gunners’ pace on the counter-attack to avoid the repeat of the humiliating result of last season.

Aldridge writes in his column for the Liverpool Echo: “I’d play Lucas and I think we could have done with him at times against Bournemouth when we looked a little bit open and things got a bit tetchy.

“Milner could then be moved out to the right for the game to make us more solid.

“I know he’s been promised that he’ll play centrally, but sometimes the manager has to say ‘just take one for the team’ and there’s nothing to stop him going back to the centre the following week.”