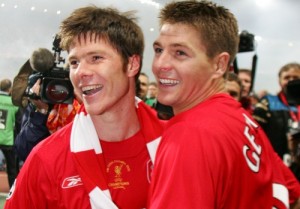 The England captain, who has one more season remaining on his £130,000-a-week contract, will be 33 in May but Rodgers believes he can play at the top for several more years.

And he would love to reunite him in midfield with old pal Xabi Alonso by sealing an £8.5million deal for the Real Madrid star.

American-based owner John Henry and the Fenway Sports Group are anxious to cut costs at Anfield, but Rodgers will stress to them just how important Gerrard is to the club.

And Reds legend Gerrard is the man Rodgers may rely on to lure former team-mate Alonso back to the club and thrill the fans. The Reds have been looking into the transfer since learning that talks between the 31-year-old midfielder and Real Madrid over a new deal had stalled.

Liverpool are believed to have made contact with Alonso’s agent, with talk of an £80,000-a-week deal on the table.

But Gerrard is the priority for Rodgers. As he prepared for today’s trip to Premier League strugglers Aston Villa, the Anfield chief said: “Steven has a year left and it’s something he and I are about to discuss.”