Reports are out claiming that Liverpool legend Jamie Carragher has warned his old club against re-signing Fernando Torres. 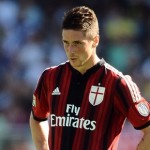 The Spanish international striker, on-loan at AC Milan from Chelsea, has been linked with a January return to Anfield.

“I wouldn’t like to see [Fernando Torres return], if I’m being totally honest,” Carragher told talkSPORT.

“If Liverpool bring a striker in you want a young, fresh, and energetic young fellow who is looking to make a name for himself.

“Fernando Torres has had an unbelievable career with the trophies that he has won but I think we saw the best of him at Anfield and that was quite a few years ago now.

“It’s been unfortunate for the lad, the way his career has gone since then. He’s still picked up plenty of trophies with Chelsea and Spain.

“With that move to Milan you’re thinking a slower paced game would suit him a bit more now, because of the problems he’s had with injuries, but it looks straight away that AC Milan are keen to offload him.

If Chelsea and Milan are thinking the same I don’t think anything would change too much at Liverpool.

“I wish him well but I think we should be looking for something else.” Adriano Galliani : Thiago Silva Is Not For Sale!