It has been reported that Liverpool will be keeping tabs on Crewe Alexandra goalkeeper Ben Garrett. 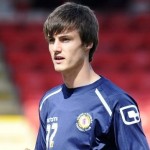 And he told The Sentinel: “There was not the budget for the goalkeeping coach because I would have loved to have stayed.

“Steve (Davis) did not think my shoulder was strong enough to play 20-odd games a season.

“I think I could have taken Ben to the next level and I would have backed myself to make him one of the best young keepers in the country.

“I really enjoyed it – if I do anything I don’t do it 90 per cent, I give it everything and I think people will vouch for that.”