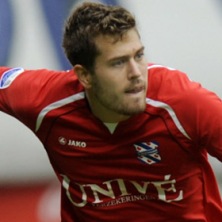 It has been reported that Liverpool boss Brendan Rodgers is maintaining their relationship with SC Heerenveen to keep track of goalkeeper Christopher Nordfeldt.

Nordfeldt travelled to Anfield almost 12 months ago to discuss a move to Liverpool before joining Heerenveen from Brommapojkarna.

Reds chiefs have kept tabs on Nordfeldt, 23, who is now enjoying an outstanding season in Holland.

Heerenveen coach Marco van Basten said: “He has a huge potential. He’s young, he’s athletic and he is a modern goalkeeper. He has shown at Heerenveen he can win matches for the team. We’ll see how far his talent can carry him in the future.

“Heerenveen has been a tradition of talented players, this summer we sold Oussama Assaidi to Liverpool, Bas Dost to Wolfsburg and Luciano Narsingh to PSV Eindhoven.”