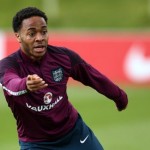 It has been reported that Liverpool chiefs have no plans to sell Raheem Sterling this summer.

The Daily Star reportedthat Sterling, 20, will have just two years left to run on his current deal at the end of the season.

The England international has told the club he will not discuss a new contract until May after rejecting an offer close to £100,000-a-week.

That has led to some of Europe’s top sides sniffing around, including Real Madrid and Bayern Munich as well as the Reds’ Premier League rivals Arsenal and Manchester City.

They could try tempt the Anfield club with a big offer this summer.

But the Reds are not ready to offload the wing wizard if they cannot find a breakthrough in the long-running contract saga.

Liverpool would still receive a fee in two years’ time if Sterling’s contract was to expire because of his age. Real Sociedad Locked In Talks With Arsenal For Joel Campbell