It has been reported that Liverpool refuse to pay over the odds for Southampton midfielder Adam Lallana. 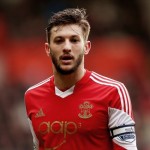 The Daily Star claims that Southampton are playing hardball over a fee for the England playmaker but Liverpool chiefs have indicated they will not pay over the odds.

Saints are understood to want a structured deal worth £26m with add-ons which could rise to close to £30m.

Liverpool have already tabled an offer in the region of £20m for Lallana, 26, and although there is room for negotiation the Merseyside club will not break the bank.

Bournemouth are owed 25 per cent of any fee received for Lallana as part of a compensation package set by an FA tribunal when he joined the Saints as youngster.