Reports are out claiming that Liverpool striker Christian Benteke is in danger of missing the derby against Everton. 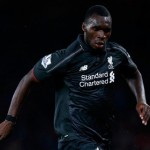 The Mirror reported that Benteke is facing a battle against time to make his Liverpool bow in the Merseyside derby.

The £32m summer signing was relieved to hear that scans on a hamstring problem picked up against Norwich at the weekend, revealed only minor damage that will require rest.

But the bad news for the Reds is he could be sidelined for 10 days, which means he will MISS a reunion with former club Aston Villa at the weekend, when they visit Anfield in a game crucial to Liverpool boss Brendan Rodgers.

And Benteke now faces a period of intense treatment to stand a chance of being fit for the visit to Goodison for the game that could define Rodgers’ Anfield future.

Arsenal, Liverpool To Do Battle For Kostas Mitroglou