Reports are out claiming that Liverpool midfielder James Milner has no regrets leaving Manchester City. 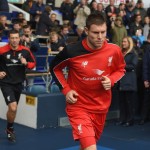 The England international star insisted he had no regrets over leaving City for Liverpool when his contract expired last summer.

“It’s obviously a brand new challenge for me and a completely different role to what I had at City,” he said.

“I had an amazing time at City, played with a lot of good players, won some trophies and I think if I’d stayed I’d be enjoying it as well. But it was a decision I made, it was time for a change and I’m enjoying this new challenge.” Vincent Kompany : We Want To Win The Champions League!