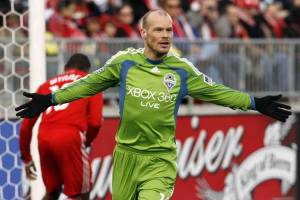 Seattle Sounders midfielder Freddie Ljungberg has been named MLS’ Player of the Month for October.

The former Arsenal and West Ham star has been in excellent form for the Sounders as he led them to three straight wins, clinching a play-offs berth in the franchise’s first season.

Ljungberg recorded four assist in the three matches and was pivotal in the Sounders finishing off the regular season strongly which outs them in a good position going into their Western Conference semi-final series against the Houston Dynamo.

Ljungberg joined teammate Fredy Montero who won the Player of the Month award back in March. David Beckham In Awe Of The Seattle Sounders Support