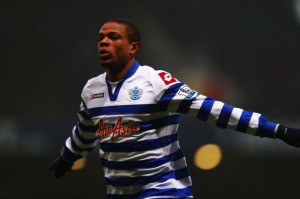 QPR’s French international striker Loic Remy has been arrested on suspicion of rape.

The 26-year-old was held with two other men, aged 23 and 22, at an address in London on Wednesday morning.

The Metropolitan Police are investigating a claim from a 34-year-old woman that she was raped by three men earlier in May.

The investigation is being led by the Met’s Sapphire unit, which specialises in rape and other crimes involving serious sexual violence.

The Met said in a statement: “Officers from Sapphire are investigating an allegation of rape which happened on 6 May in the west London area.

“The allegation was passed on to the MPS by Kent Police on May 8 after the 34-year-old female victim reported it to them on the previous day. The victim alleges she was raped by three men.

“On the morning of Wednesday, May 15, three men were arrested at an address in Fulham on suspicion of rape – they remain in custody at a west London police station”.

Remy joined QPR from Marseille in January for a club record £8m fee and has scored six goals – but was unable to help Harry Redknapp’s side avoid relegation.

The club said in a statement: “The club is aware of the allegations regarding Loic Remy, but due to police investigations is unable to comment.”


Chelsea and Arsenal could be forced into a play-off