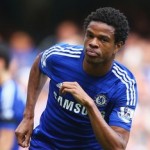 It has been reported that Loic Remy believes playing alongside Chelsea striker Diego Costa will improve him.

The French international striker scored on his Chelsea debut in victory over Swansea City.

Remy told chelseafc.com: “Everyone has good quality here and can deliver good passes for me, so I have to take my opportunity when I can because Diego Costa is a fantastic striker. He’s on fire at the minute so I’m just going to do my best every time the manager wants to use me.

“To play with this kind of player I have to progress. We try to push behind him and that’s a good thing.”