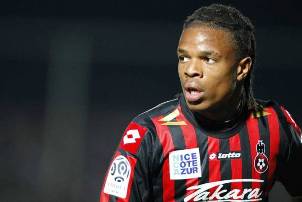 Loïc Rémy, this is the name that is being linked with almost every big name teams out there.

Premier League teams that have expressed their interest in the player are teams like Arsenal, Liverpool and West Ham United.

European giants AC Milan and host of other teams across Europe has also register their interest in the versatile forward.

Loïc Rémy was born on the 2nd of January 1987 and is a former France under-21 international who currently plays French club Nice in Ligue 1.

Rémy is naturally a striker but he is also occasionally used in the wings and attacking midfield positions.

Rémy began his career, as a youth, playing for local outfit ASPTT Lyon, who were coached by René Jacquet, the brother of manager Aimé Jacquet. After being spotted by Olympique Lyonnais scouts, he joined the club’s youth academy.

After spending several years in the academy, on 11 October 2006, Rémy signed his first professional contract agreeing to a three-year deal with Lyon.

Rémy however did not get enough playing time at Lyon and on 31st of January 2008, Rémy was be sent on loan to fellow Ligue 1 club RC Lens. The striker made twelve appearance for Lens and scored 4 goals before returning to Lyon for the 2008–09 season.

However, Rémy’s stay at Lyon was cut short after the French giants sold him to Nice in a deal worth approximately €8 million and thus making Rémy the biggest transfer in the club’s history.

In the 2009/2010 season, Rémy once again made 36 appearance and scored an impressive 16 goals in all competition.

In total, the 23 year old Rémy has made 99 career appearance and scored 33 career goals so far.

Rémy has also played for the France U-21 side making 9 appearance and adding three goals to his name. He was only called up once so far for the senior French side and that was in a friendly match against Nigeria where Rémy came on as a substitute.

With such an impressive resume to boast and the versatility to play in any forward position, it is no surprise that Rémy has become one of the top targets for teams preparing for the upcoming 2010/2011 season.

At the tender age of only 23, Rémy has time on his side and if he continues scoring goals for club and country, Rémy would definitely become a household name in no time and be compared to other French strikers such as Thierry Henry and Nicolas Anelka.

What will happen next in Rémy’s career is anyone’s guess but one thing that is certain is that Rémy is destined to become France’s next Superstar.