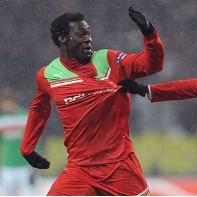 Lokomotiv Moscow mounted a second-half fightback to snatch victory in the first leg of their Europa League last-32 tie with Athletic Bilbao at the Luzhniki Stadium.

The Spaniards had defied sub-zero conditions to take a deserved half-time lead thanks to a 25th-minute strike from their star teenage winger Iker Muniain.

But Lokomotiv roared back after the break with Felipe Caicedo winning a 61st-minute penalty, converted by Dennis Glushakov, before scoring the winner himself 10 minutes later.