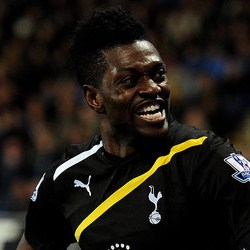 The London Evening Standard claim that Lokomotiv Moscow have made an £8million bid for 28 year old Togo striker.

Adebayor is still in talks over a permanent move to White Hart Lane but Spurs have yet to come to an agreement with the former Arsenal striker.

Spurs are reluctant to match Adebayor’s £175,000-a-week salary but Lokomotiv, who are managed by former Croatia coach Slaven Bilic, are prepared to take on his wages.

Manchester City are ready to do business with the Russian club but it is understood that Adebayor prefers a transfer to Tottenham.