It has been revealed that Napoli winger Lorenzo Insigne is of the belief that anything is impossible when his side meet Arsenal in the Champions League next month. 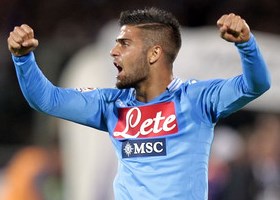 The Partenopei need to beat the Gunners by three goals at the Stadio San Paolo on December 11 in order to progress to the knockout phase of Europe’s premier club competition and Insigne feels that the Italian side are capable of causing an upset.

“Obviously I am pleased with my goal, but it was bittersweet,” he told Mediaset Premium after scoring in Tuesday night’s 3-1 loss to Borussia Dortmund.

“Still, I am confident because we put in a good performance and we are still in with a shout.

“We will be giving our all with our home fans behind us in our final game and, even against a top team like Arsenal, anything is possible.”