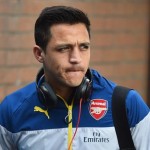 Liverpool legend Phil Thompson has declared that losing the battle for Alexis Sanchez to Arsenal last summer condemned the Reds to a disappointing season.

The Chile international was all set to move to the Reds before Arsenal stepped in.

Thommo told Sky Sports: “The talk was that Liverpool had made a big bid for Sanchez.

“I wouldn’t have let Suarez get in the taxi to the airport if Sanchez hadn’t have already done the deal.

“Liverpool were in the driving seat on this. They could have said to Suarez, ‘sorry, as much as you want it to go and it’s Barcelona, you are not going anywhere until he signs.’ I know there were family issues and that’s why he went to London but I wouldn’t have let it (the Suarez transfer) happen.”