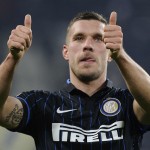 It has been reported that Lothar Matthaus had positive words for Lukas Podolski over his move to Inter Milan yesterday.

The German football legend has been an outspoken critic of Podolski, but backs him to rediscover his form after a loan move from Arsenal.

“I want to say that I have no problem with Lukas and if he hadn’t been misinformed about my comments, he wouldn’t have reacted in such an infantile way,” Matthaus told Blick.

“As for his ironic comment that I am a ‘successful Coach,’ I can only say I’ve become more famous as a Coach than a player.

“In the last two or three years Podolski has focused more on his personal image than football. I just wanted to point out he should concentrate on the essentials, because both at Bayern and Arsenal he did not fulfil his potential. I hope he can do it now at Inter.” I Need To Deal With Pressure – Arsenal Striker Olivier Giroud