It has been revealed that Manchester United players have complained to Michael Owen about Louis van Gaal’s strict methods. 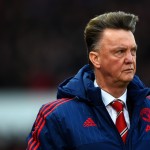 The Sunday Express claims that the former England and United striker was in the tunnel recently in his role as a TV pundit.

And it was then that one leading player turned and told him he wouldn’t enjoy playing under Van Gaal.

Under-pressure Van Gaal refused to give any guarantee that he will still be United’s manager on Monday against Chelsea.

Time appears to be running out on the 64-year-old Dutchman as United slid to their fourth straight defeat at Stoke City.