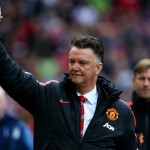 Reports are out claiming that Manchester United boss Louis van Gaal has hailed his players for their revival.

Asked about the most influential factor behind United’s vast improvement, van Gaal told MUTV: “The key is the players, who are developing themselves in the process of what we have done with each other. I believe because it is not only the last five matches. I think in more than 20 games we’ve only lost two times, so it’s a long row of matches that we win or at least don’t lose.

“You have very good performances and you also have bad performances, but at the end the result is good and the key is always the players. The players have to do it at the right moment, at the right time against resistance. We have one more point than City now, and we’re one point behind the second position in the table [Arsenal], so that speaks for itself, I think.”