It has been reported that David Beckham has reacted positively to Manchester United’s appointment of Louis van Gaal. 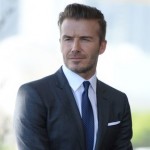 The 62 year old was officially announced as United’s new manager on Monday and Beckham has joined the ever-growing chorus of people who have backed the move.

Beckham told Sky Sports News : “He has got a history of working with young players, bringing players through academy systems at places like Ajax,”.

“That can only be great for Manchester United.

van Gaal will take the reins at Old Trafford following his obligations with the Dutch side at the 2014 World Cup in Brazil. Robin van Persie Fires Spain Warning : Do Not Underestimate Us!