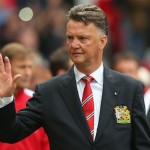 The Foxes are one of the favourites for relegation, but the Dutch tactician has been impressed by the spirit they have shown so far this term.

“They have had some difficult games,” the United boss said of the Premier League newcomers, who have taken five points from their opening four matches.

“They were behind (against Arsenal) and they came back (to draw) so the character in their team is very good.” Sir Alex : Jonny Evans Is Now The Best Defender In The Country!