It has been revealed that Louis van Gaal is remaining coy regarding Manchester United’s pursuit of Real Madrid star Sergio Ramos. 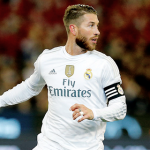 United are believed to be chasing the services of the Spanish international defender but contrary to many reports, there have been no discussions between any parties involving such a transfer.

Red Devils boss van Gaal was recently queried regarding the status of the transfer but the Dutchman has remained coy as to whether a deal for Ramos will take place this summer.

Speaking to reporters in the US, van Gaal said: “I cannot talk about these rumours. It’s a process. Maybe Mr Ramos is in the process, you never know.”