It has been reported that Louis van Gaal’s new deal with Manchester United is worth £6 million-a-year. 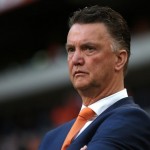 The Holland coach’s appointment as David Moyes’ successor on a three-year deal was finally confirmed at 2pm on Monday, an hour after an internal email informed staff of the new managerial structure.

According to the Daily Mail, Van Gaal can top up his basic salary with a hefty bonus for reaching the Champions League, and it was apparent from his demeanour that he intends cashing in at the earliest opportunity.

“To work as a manager for Manchester United, the biggest club in the world, makes me very proud.

“I have managed in games at Old Trafford before and know what an incredible arena Old Trafford is and how passionate and knowledgeable the fans are.