It has been revealed that Louis van Gaal is digging in at Manchester United. 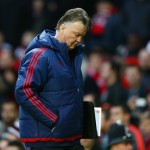 The Daily Mail claims that he has told close friends that he has no intention of quitting as Manchester United boss.

The under-fire Dutchman returned to Carrington on Tuesday after spending two days back home in Holland to celebrate his daughter’s birthday.

And it is understood that the United boss is ready to fight on despite being hounded down the tunnel by angry fans following Saturday’s defeat to Southampton at Old Trafford.

For now, it appears as though he retains the support of Ed Woodward even though the United chief has been canvassing senior players for their opinions over the last few days.