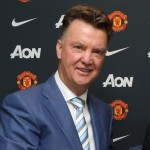 Smith told talkSPORT: “Manchester United expect to win the Premier League title and get back into the Champions League.

“Anything less is not really acceptable. Van Gaal will spend big, there’s no doubt about that.”