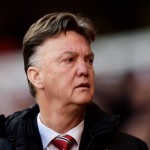 Reports are out claiming that Manchester United boss Louis van Gaal has paid tribute to supporters at the halfway stage of the season.

The Dutch tactician was asked by reporters on Tuesday what had stood out most during the opening part of his first season in charge and while van Gaal was keen to praise his side’s fighting spirit, he also paid tribute to the backing he and the players have received from supporters.

“The thing that has pleased me most is the fans, they are amazing,” he told MUTV.

“We started the season poorly, but in spite of that they have supported us, they have great belief in their squad and manager. I want to thank them because they’ve been very important in our weaker moments.

“In terms of the team, I think it has to be our fighting spirit, and I think that’s why the fans have supported us every week. In some matches we’ve been behind, the players have had to fight until the end, and they’ve done that successfully.”