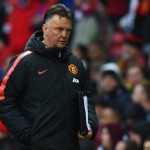 Reports are out claiming that Louis van Gaal insists the title race is not over despite Manchester United’s defeat at Chelsea.

The loss at Stamford Bridge leaves them 11 points behind Jose Mourinho’s side – who have a game in hand on the Red Devils.

Van Gaal, however, insisted: “We were the dominant team on the pitch but we lose. Everything is the result.

“Everybody can have his own opinion and the winner takes it all. It’s a song, but it’s like that.

“The title is not definitely gone because we can still win 15 points.”