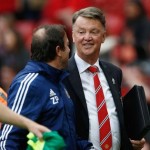 The Bundesliga side were stunned by a five-goal haul from Bayern Munich star Robert Lewandowski inside nine second-half minutes last week.

“But also I saw the first half when Wolfsburg were very strong and in control, so it was unbelievable what happened within nine minutes after half-time.

“I have never ever seen that happen so fast. I saw something similar when I was at Barcelona and we were 3-0 up against Valencia and we lost 3-4 in 15 minutes – but five goals in nine minutes is less.” Dimitar Berbatov Happy For The Success Of Danny Welbeck