It has been reported that Manchester United boss Louis van Gaal has made Barcelona dazzler Alexis Sanchez a top summer target. 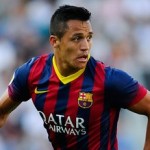 The Guardian claims that the Chile international has been made one of United’s principal targets this summer.

The 25 year old is in Brazil with his country ahead of the World Cup this summer, but his club future is up in the air.

And United’s new Dutch manager Van Gaal reportedly wants him to bring pace and flexibility to his front line as he seeks to make his mark on proceedings at the top of the Premier League next season.