It has been reported that Chelsea boss Jose Mourinho will put his friendship with Louis van Gaal to one side facing Manchester United tomorrow. 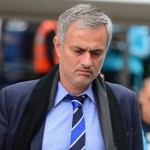 The duo have only faced each other in one competitive match before – the Champions League Final in 2010 when Mourinho’s Inter Milan came out on top against Bayern Munich.

Mourinho said: “I don’t play against Van Gaal, Chelsea plays against Man United. I have no time and he has no time to look around and see who the opponent is. After the match, he’s one of my big friends in football and I’ll be happy towards him.

“Everybody knows the respect I have for him. I never hide the respect and the relation and an important influence in my career. But after tomorrow, he’s going to be my opponent.

“He was important to my career. He gave me a good opportunity to keep working at a high level as a young coach to be working four consecutive years – one with Sir Bobby Robson and three with him was very important. If I choose important people in my career, he’d be in there.

“We respect our opponent who is one of the best and most difficult opponents in the Premier League. We are confident, in a good moment and in a good situation and there is no reason for us to change our feeling. We play against the big team but feel that we’re in a very good moment. We’ll try for the best possible result.”