It has been reported that Manchester United manager Louis van Gaal has insisted that he will not be making panic buys following the defeat against Swansea City on Sunday. 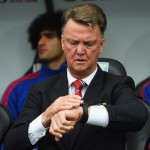 United succumbed to their first defeat of the Premier League season with a 2-1 result at the Liberty Stadium on Sunday and the poor performance emphasised the fact that the Red Devils still require strengthening if they are to stake a serious claim for the title this season.

With two days remaining until the end of the transfer window, it is expected that United will be forced into reactionary signings but van Gaal has revealed that he will not purchase new players just for the sake of it.

Van Gaal said: “You can never speak as a club like Manchester United that you are satisfied. We shall not buy at the end of the transfer period another player that we have not scouted before.

“We know already in advance what is happening and what is not happening. It is not an issue. We have to keep on and in January the windows are open again.

“It is a process. I cannot change that process. You are dependable not only on the player you want but the club and also what you want to spend. It is a lot of things you cannot force.”