It has been revealed that Louis van Gaal was thrilled with the way Manchester United played at Old Trafford on Tuesday night. 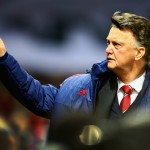 The Red Devils put in a stellar attacking display to beat Stoke City 3-0 thanks to goals from Jesse Lingard, Anthony Martial and Wayne Rooney.

It was a far cry from the dour performances produced in recent times and the fluidity of United’s attack resonated well with van Gaal who has been under pressure of late.

“It was a great performance,” Van Gaal told Sky Sports. “In the first half, we created attacks, fantastic goals.

“We created more chances above that. In the second half we controlled the game. We scored the third goal. It was a very good game.

“Against Derby County (in the FA Cup on the weekend) we played very well, also like this evening. Three goals in a row. I hope it gives us a lot of motivation to continue.”

Regarding United’s quality second goal from Martial, the Dutchman added: “Great goals. From the building up until the end of the goal it was a superb goal.

“I’m very happy. You can see the team is scoring the goal and not only the player.”