It has been reported that Louis van Gaal was buoyed by Manchester United’s narrow 1-0 win over Newcastle United on Wednesday night. 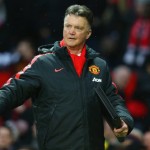 The Red Devils required an 89th-minute winner from Ashley Young to get the better of the Magpies at St James’ Park in midweek Premier League action but van Gaal suggests it was their best showing of the campaign despite the tight scoreline.

The Dutch tactician said : “I think we have dominated for 90 minutes, maybe our best match of the season, especially in an away match we deserved the victory,”.

“We didn’t reward ourselves in the first half. It was a narrow escape because our (top four) rivals have won also so it’s a rat race.

“We have created a lot of chances and could have scored much earlier. They also made two big chances and I think David de Gea rescued us at that time.”

The victory kept United in fourth place on 53 points which sees them sitting 10 behind league leaders Chelsea, five in arrears of crosstown rivals Manchester City and one after third-placed Arsenal.