It has been reported that Louis van Gaal will fall on his sword if Manchester United lose to Chelsea on Monday. 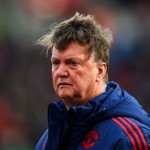 The Mail on Sunday claims that Van Gaal is preparing to quit Manchester United if they flop to their fifth defeat in a row against Chelsea.

The downcast United manager is fighting for his job after another dreadful 2-0 defeat against Stoke and said if he is unable to get a response at Old Trafford, he will jump before he is pushed.

That is provided the club don’t take their own unilateral action in the next 24 hours and throw Ryan Giggs in to take temporary charge.

“It is not always the club that has to sack me,” said Van Gaal. “Sometimes I do it by myself. I am the one who wants to speak first.”