It has been reported that Louis van Gaal has told Manchester United to pull out all stops for Bayern Munich winger Arjen Robben. 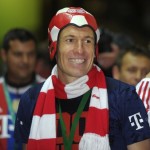 The Daily Mail claims that the Dutch international winger is keen to work with his Holland coach at Old Trafford.

The former Chelsea star was one of Van Gaal’s first signings in Germany when he joined from Real Madrid for £20m in 2009.

The 30-year-old winger has recently signed a three-year deal but that is unlikely to discourage Holland coach Van Gaal, who will be working with Robben at the World Cup.