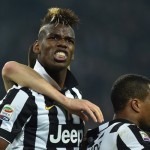 Reports are out claiming that Louis van Gaal wants to bring Juventus star Paul Pogba back to Manchester United this summer.

The Sunday Telegraph reported that United are willing to go to £60 million to sign the Frenchman, who quit the club on a Bosman three years ago.

Pogba recently signed a new deal at Juventus, taking him to 2019, but there has been sufficient encouragement to suggest he is likely to be sold.

Van Gaal’s predecessor David Moyes had also considered a move for the powerful midfielder and United were again linked last summer before deciding then that the £60 million asking price was too much at that time.

However, that valuation is now likely to be met with Pogba regarded as being in the top tier of elite players.